Abstract: The cities are becoming more important than the national governments which are either too big for local issues or too small for the big issues like climate change. Intercity movement is bound to increase with growing climate change. There are now three main forms of urban settlements: the town, the city, the refugee camps. With the largest concentration of young population, African cities need complete restructuring to meet the needs of a young highly mobile population flooding in. The author elaborated the biomimicry approach in designing buildings and recommended the following methods for making sustainable architecture and cities: adopting the poly-centric city model; envisioning the city as an ecosystem; building adaptable city through adaptable architectural structure; architectural form follows process in nature; producing an architectural expression unique to the local context. 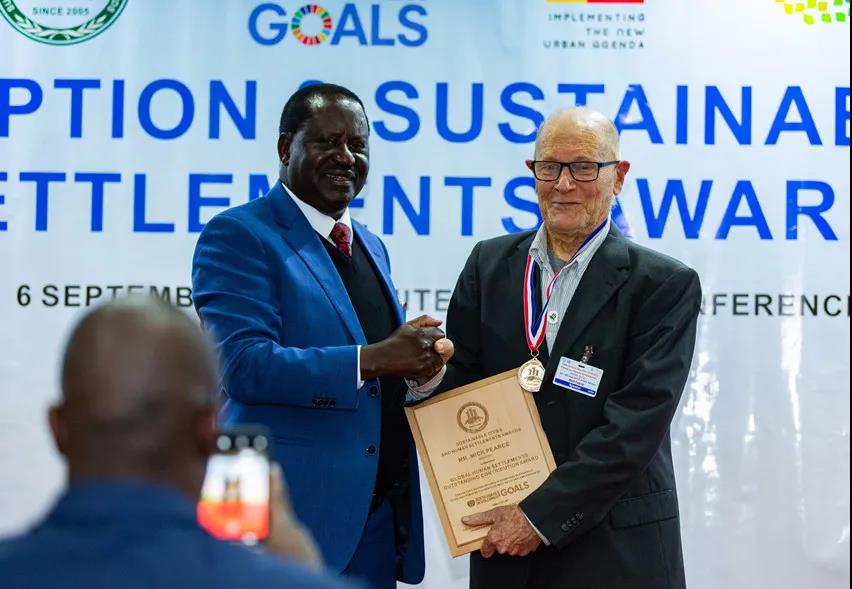 As an internationalist rather than a nationalist in Africa I am beginning like the rest ofhumanity to join the global empire. It is something I learnt from fellow Africans. Seeing them travelling from city to city, town to town endlessly in search of jobs, trade, education, food, water, or politics, always driven by an expectation of something better I realised that theNational boundaries, although increasingly obstructive have less and less meaning to themajority of young Africans. They would say that they have visited “Cape Town “not South Africa, “Lusaka “not Zambia. They seem to identify more with the cities than the nation thatthe city is in.This follows the pattern one can see the world over. The cities are becomingmore important than the national governments which are either too big for local issues or too small for the big issues like climate change.

This intercity movement is bound to increase with climate change as rainfall and heat patterns change. It is the cities and those who govern them who have to cope with immigration of environmental, economic or political refugees. There are now three main forms of urban settlements; the town, the city, the refugee camps.

The process to adopt if the people agree to the polycentric idea is to first understand the movements of goods and people and to identify the node points of a possible network rather than a spider’s web. These nodes need support by encouraging densification. The routes linking them must become able to carry the heavy traffic including public transport with long busses or even tracked transport fast from node to node. Node support can be helped by giving these nodes identity (maybe one is the sports stadium and another is a university). The smaller short haul kombis can handle all the sub-routes. 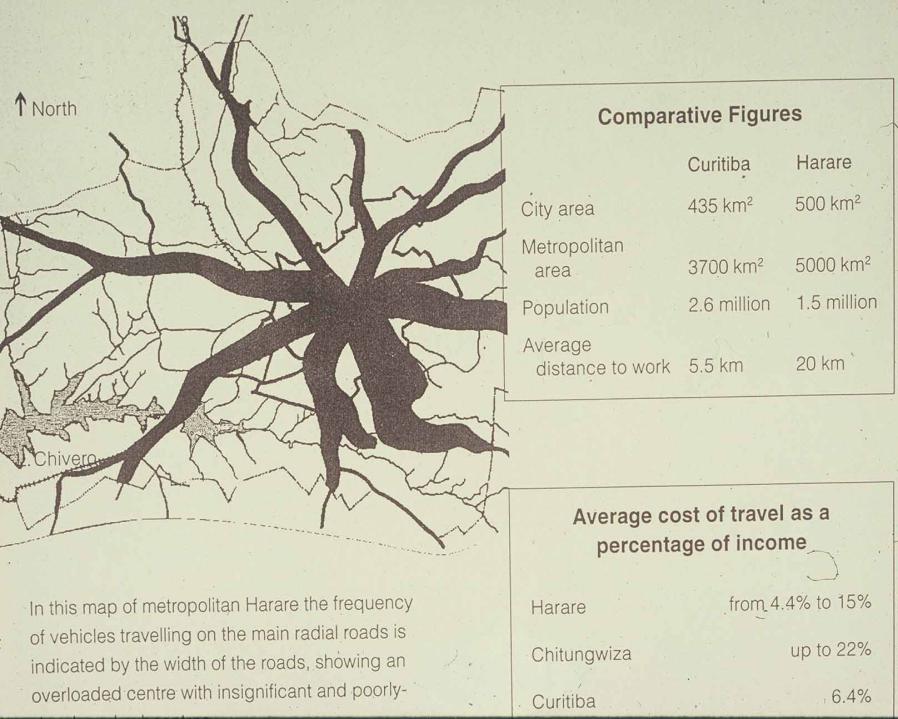 The other great population movement from rural settlements to towns and cities can be seen that the urban growth figures are way above fertility rates. (8% growth in Harare with rate of natural increase at 3%). There are goods and bads about urbanization. One of the goods is freedom for women from having to produce more and more babies for farming. By going to town women can get a job and independence. This is happening with urbanization; fertility rates are falling often well below replacement. 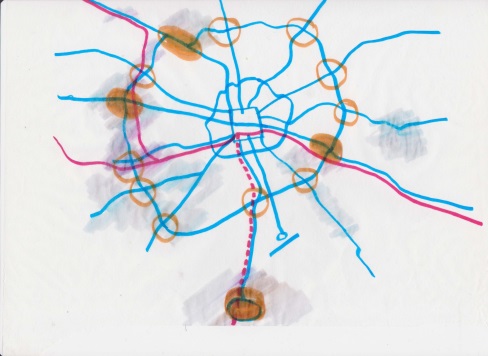 The other factor which influences urban planning strategy is the average age. I am told that the average age of the African populations is 15 years, compared this with the ageing population of Japan at 47. A young population like this usually needs a higher proportion of short stay rentable housing and prefers the centres of activity.

Our ex colonial towns and cities are modelled on the “garden” suburban city with the railway dividing the rich from the poor (formally white from black) and radial roads all leading to a Central Business District (CBD) need complete restructuring to meet the needs of a young highly mobile population flooding in. What I call the architecture of movement needs to be applied now amid the chaos on our roads.

POLY-CENTRIC CITY IS A POSSIBLE MODEL

The poly - centric city is comprised of sub nodes which are equally balanced centres of high activity, each with their own unique functional identity. Each node is then connected with an efficient public transport system to become a transport network. These nodes can be actively densified with appropriate types of housing. The nodal-net city can then develop a public transport system which is complementedby the small bus system covering variable short distances. Curitiba in Southern Brazil is a good example of this multi layered transport system.

We need a city made of adaptable structures which are designed to be altered at any time to cope with changing needs. This, in planning terms should be called mixed development with no specific use function named. The adaptable structure has to accommodate many functions with different floor loads and demands for light and air.

In 1996 we completed Eastgate. I returned from China in 2010. Harare city centre had changed so much that I started to investigate converting this huge office block Eastgate into housing. When designingEastgate in 1992, we regarded adaptability as important but not dominant compared with other matters. Now adaptability is a dominant strategy because the rate of change has increased. The adaptable structure is usually a framed structure with infill panels made of non-structural materials which can be altered easily. 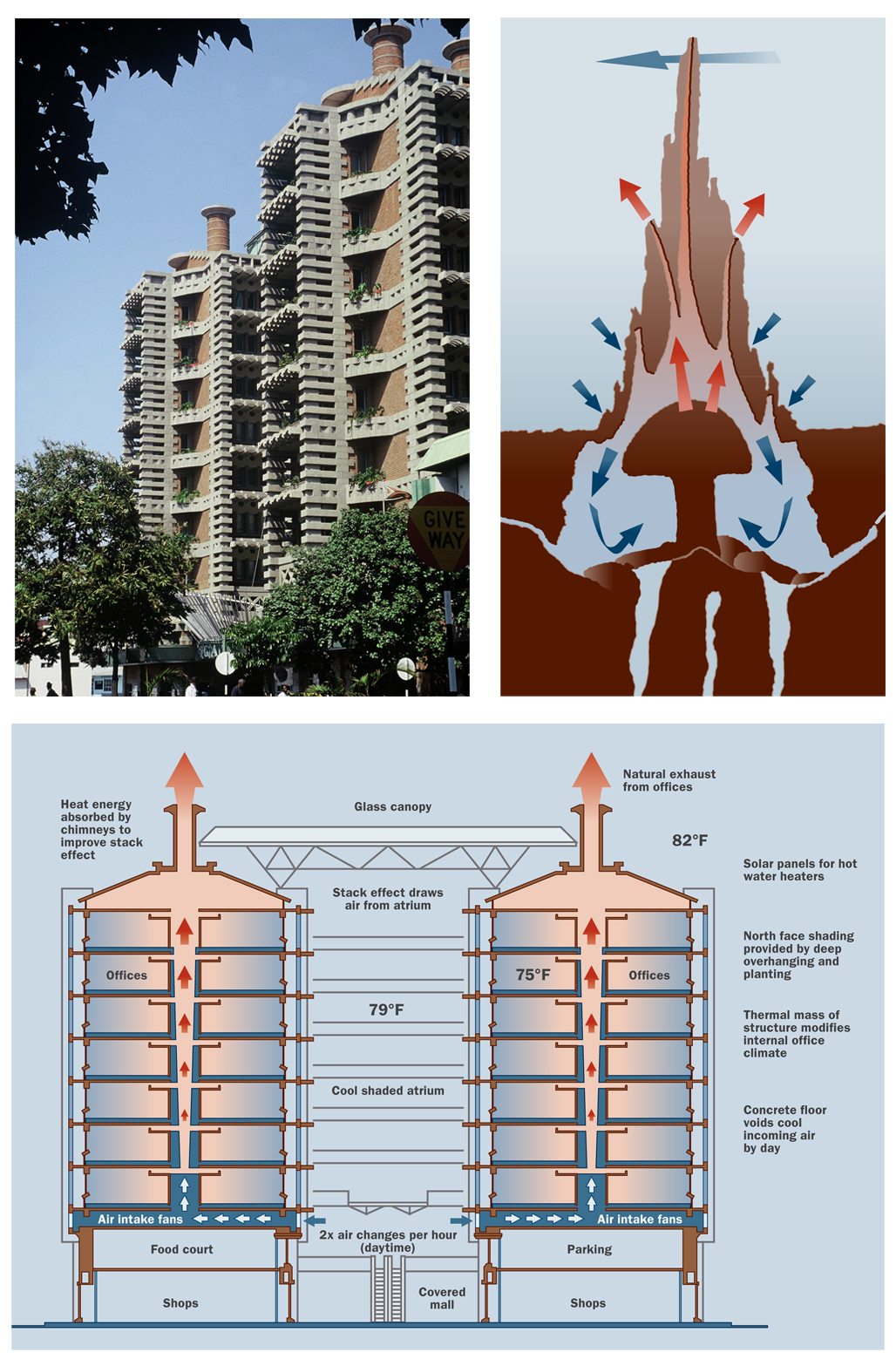 How does this approach translate into an aesthetic?Should architectural expression celebrate this incompleteness at every scale?

Following my bio mimic approach l think of in what ways a tree is an adaptable structure. A tree may belong to a generic family and to that extent its growth patterns are programmed, but at the same time it changes response to the immediate natural environmental forces. It grows towards the light while balancing its structural elements against the wind and gravity. It is a process in real time rather than a fixed form. 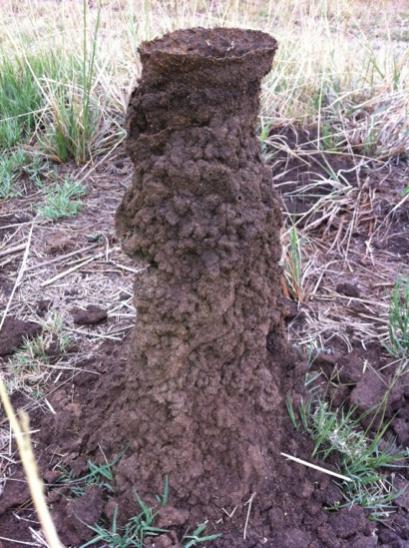 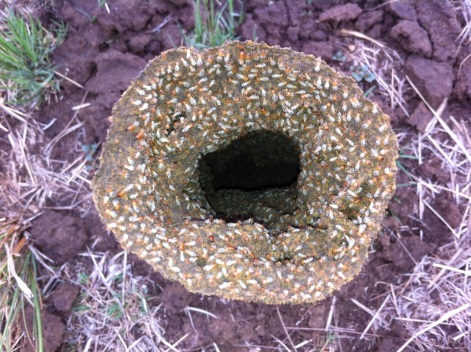 the chimney like form of a termites breathing tower

At this fundamental level studying a tree’s growing process is a guide to envisioning a city or a building within a city as a process rather than as a fixed form frozen in time. This approach to design is copying the processes in nature rather than copying natural forms as objects. To take another example the chimney like form of a termites breathing tower emerges from a process in which the tower’s builders respond to the sun or to the movements of air as well as the need for balancing the oxygen/carbon dioxide mixing, otherwise they suffocate in their underground chamber. In this case the architect of the tower building process could be the sun or the wind or the combination of both. 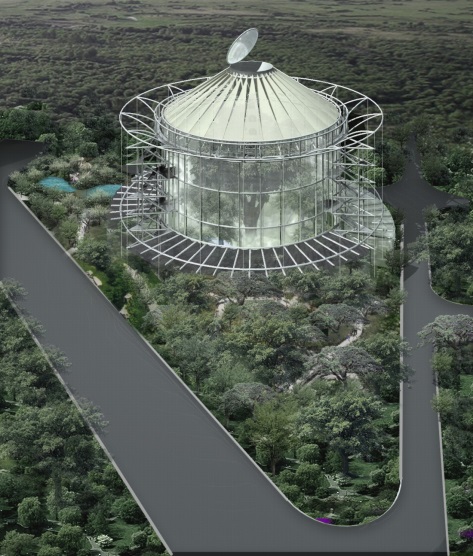 Buildings which address the immediate natural forces in the micro climate as well as the social and economic resources at the site location are following this termite inspired model. The Eastgate design was an early application of this design process.

At the next scale down is there an optimum distance of a window from natural light? In the Netherlands this is 6 meters. A study done in London based on this figure arrived at a maximum width of 17 meters for access to natural light from both sides of a building block.

The CH2 building in Melbourne Australia is a good example of a building we designed according to this form follows process approach. The light levels decrease the nearer to street level so the windows should logically be smaller at the top than at the bottom. This is similar to a natural forest where smaller leaves are found at the top nearest the light and correspondingly larger leaves are found at the bottom. 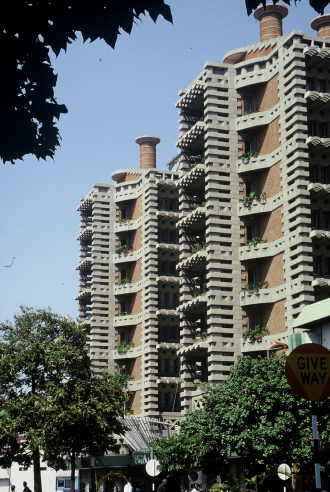 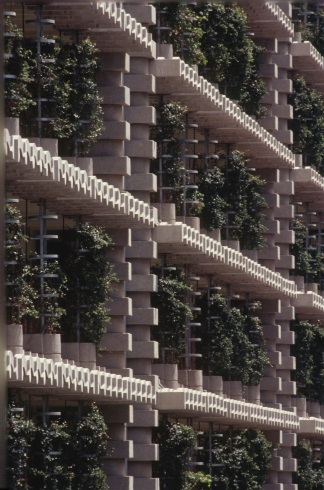 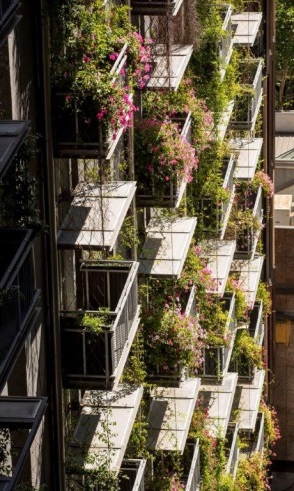 Facades of Eastgate and CH2 are the buffer zone between the forces of nature and the inside.

The adaptable building structure within an adaptable networked community is again something quite normal in nature. A multi-layered, interconnected, solar lit, water and resources supplied living system is a rain forest or a coral reef. Can this be also a city? The truly adaptable building is basically a framed building with lightweight infill partition walls which can be changed by the agents of change the occupiers. It therefore at the time of its conception has no name. It is not built for any specific function. Remember investors in the market are certain to change and so must the building change be available. So-called “modern architecture” is often tied to the dictum “form follows function”. This has somehow become Form driven design that glorifies the architect’s whim, often sitting in the middle of a city with 4 elevations separating it from all its neighbours. Modern Architecture has nothing to do with sustainable architecture and this needs to be instilled into the way students of architecture are taught today.

Scientists are beginning to look at cities using the same approach as they look at eco systems in Nature. Schilthuizen describes London as a pressure cooker of evolution having discovered from various scientists’ observations that many species of animals have evolved in London and are evolving into hybridised or even separate species at far faster rates (than Darwin theorised could happen) in the highly modified anthropogenic environment.

The above is an attempt to describe my approach to design which some call Biomimicry. In summary, I recommend that (a) architectural form follows processgoing on behind forms in nature; (b)envisioning the city as an ecosystem; (c) building adaptable-structures in adaptable cities; and (d) responding to social, economic and natural environments, we should produce an architectural expression unique to its site. 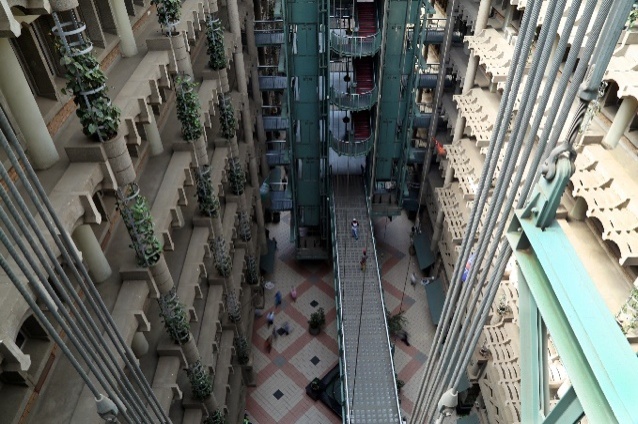 The above images of Eastgate showing the atrium from high level of the roof top chimneys and the skywalk. The images move towards a future architecture which focuses on a resilience which is becoming vital for climate and social change.

(This article was contributed by Mick Pearce, architect and biomimicry expert.)

Mick Pearce has been working in Australia, the UK, Zimbabwe, China and Zambia for 56 years. His experience covers a wide range, from building in remote parts of Central Africa to converting old buildings in North-East England and large-scale city developments in Harare and Chinhoyi, Zimbabwe’, an ecological exhibition centre in Belgium and the CH2 council office block in Melbourne, Australia. Committed to appropriate ecological architecture, Mick Pearce has focused upon the development of buildings which have low maintenance, low capital and running costs and renewable energy systems of environmental control. His work involves an approach to design in which the architecture expression is seen as a balance of the natural, the social and the economic environments in which the project is sited. He uses models from nature, copying natural processes which he studies through the new science of Biomimicry.

His most seminal project is Eastgate, a mixed office complex and shopping mall covering half a city block in the business centre of Harare. What makes it unique is that it is not only ventilated, cooled and heated entirely through natural means, but it works. Its ventilation costs one-tenth that of a comparable air-conditioned building and it uses 35 percent less energy than six conventional buildings in Harare. In the first five years alone the building saved its tenants $3.5 million in energy costs.

In all aspects of his architectural work and life Pearce has demonstrated a compelling commitment to humanist ideals. He has developed a theory and practice of architecture that puts him at the forefront of environmentally sustainable and socially responsible building. He was conferred the Global Human Settlements Outstanding Contribution Award in 2019.

Back Previous:The Statement on "UN Policy Brief: COVID-19 in an Urban World” Next:How far are we from safe and green city?